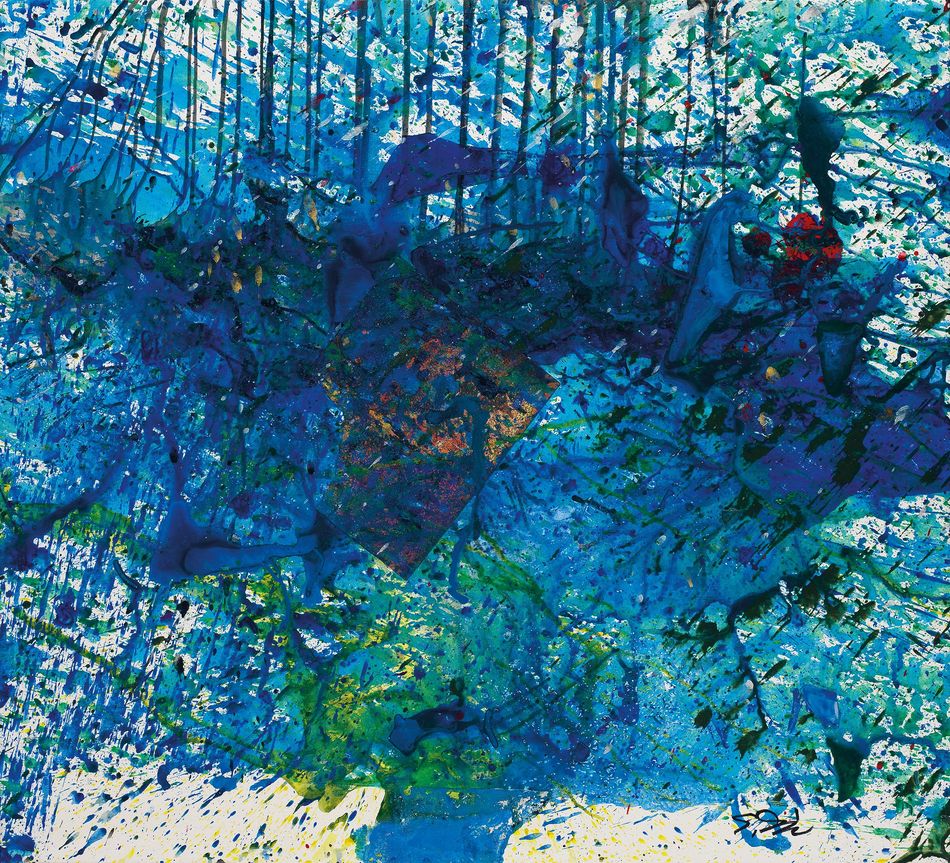 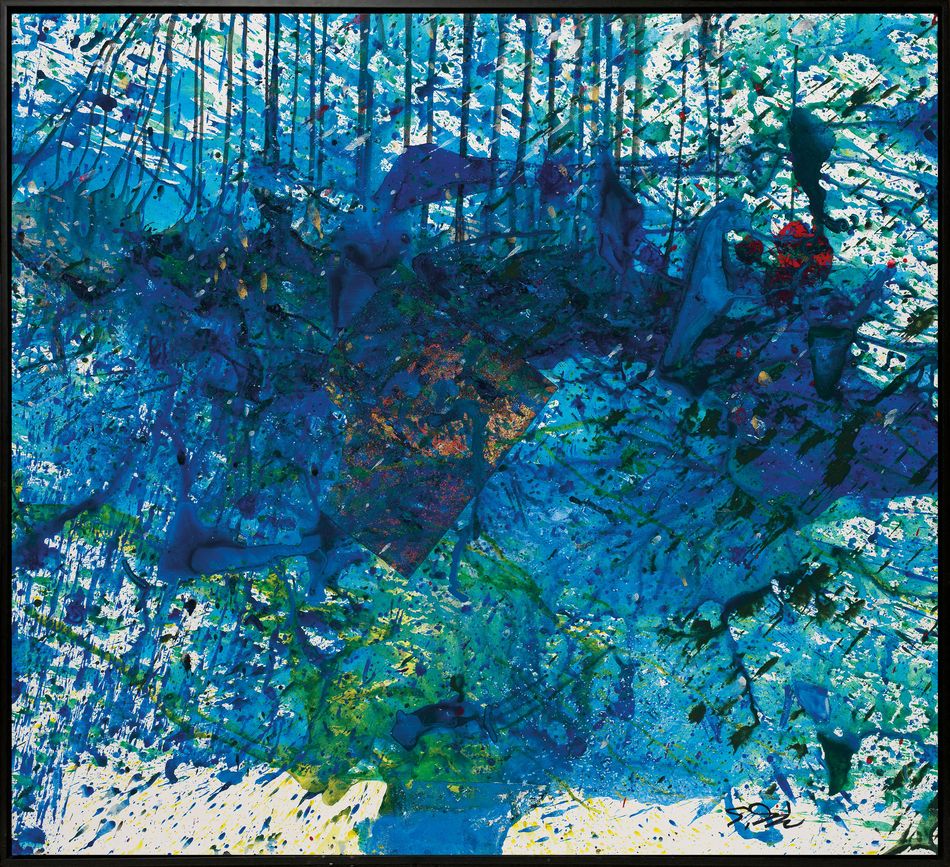 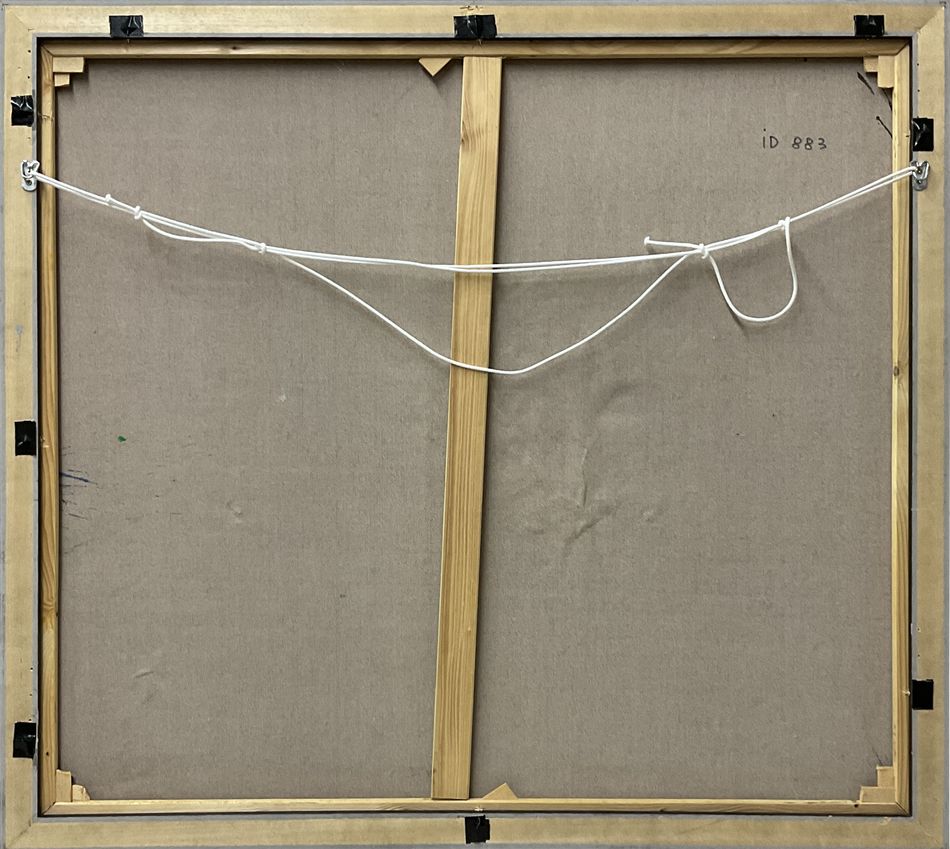 Acrylic and broken glasses on canvas

Founded by Jiryo Yoshihara in 1954, the Gutai movement was named by Shozo Shimamoto. The two teachers were friends who co-founded the Gutai Art Association. After the death of Yoshihara in 1972, it was announced that the association would be dissolved. Over 18 years, more than 60 artists have come in and out of the doors of the association. Shimamoto used the name "Gu" to mean "tool" and “Tai" to mean“body”as a way to signify the concept of “presenting with tools and bodies". Members abandoned the tools of traditional artists, especially the use of brushes. Instead, they used all kinds of bold and fearless self-expressions, especially physical participation. This served as a form of opposition and rebellion against Western abstraction, refuting "abstract" in the name of "figurative". Inheriting the mantle of Jackson Pollock's action painting, they imbued action into art through a richer, deeper, more persistent and intense style.

"First of all, I think the brush should be used to liberate the paint. Only by destroying and discarding the paintbrush can the paint be freed again and a sense of distance created. Only when the paint is liberated from the paintbrush can it bloom." states Shimamoto in “The Theory of the Curse of the Brush.”As one of the founders of Gutai, Shimamoto aimed to "let the paint completely escape the bondage of the paintbrush", while coining the term "Gutai" with strong conceptual characteristics: Jiyuan Yoshihara drew circles; Saburo Murakami passed through paper walls; Kazuo Shiraga painted with his feet; Shozo Shimamoto threw paint bottles onto the canvas; Tada Motoyo hung paint bottles over treetops— a revolution in action and concept is distinctive feature of Gutai. Its concept art was more conceptual than American conceptual art by 10 years.

In the 1950s and 1960s, Shimamoto explored the boundaries of painting by throwing bottles onto large canvases, applying heavy paint, and punching holes in textured paper. In the 1970s, Shimamoto was invited to speak for the emerging artist group, "AU". Proof of Peace AU 33 is a representative work from this period. A feature of the works from this collaborative project is a piece of brown kraftpaper pasted in the center of the work, an idea carefully pondered before creation. Building on the original method of throwing paint bottles, collage is added to make the work more visually three-dimensional. After a series of movements by Shimamoto, the paint bottle is shattered across the canvas. Through such actions, these dynamic colors in the painting are deconstructed in a disorderly manner, as the glass shards of the bottle are scattered across. When the blue is hit by a bright yellow to produce a new emerald green, all incidents are re-integrated, and a new order is constructed from amongst the disorder. The reservation of a blank space embodies Eastern philosophical concepts. Behind the seemingly random concoction, Shimamoto incorporates his own understanding of the word, "peace", into it. Shimamoto's creations are slowly transferred to two-dimensional planes through action. Around the same time, Italian artist Lucio Fontana also began to break down planar surfaces to reconstruct three-dimensional or spatial planes. Furthermore, French-based German artist Hans Hartung was also making his mark in the global art scene with his "action painting".

Proof of Peace X AU is the best work that communicates the context behind the message of Gutai. It can also be regarded as a communication network between Japan and the international art world, which contributed to the conversations and exchange between Gutai and American postwar abstract expression master, Jackson Pollock, and the Father of American Mail Art, Ray Johnson. Shimamoto himself published articles on the limitations of painting tools and brushes on art, as well as on an ideal theory of beauty. In recent years, the art world has reaffirmed the importance of this postwar art movement, and with the support of collectors along the west coast of the United States, the "Gutai"movement has become common in outstanding art collections. Shimamoto's works are housed in the Tate Museum in London, the Centre Pompidou in France, and the National Museum of Modern Art in Italy, among others.