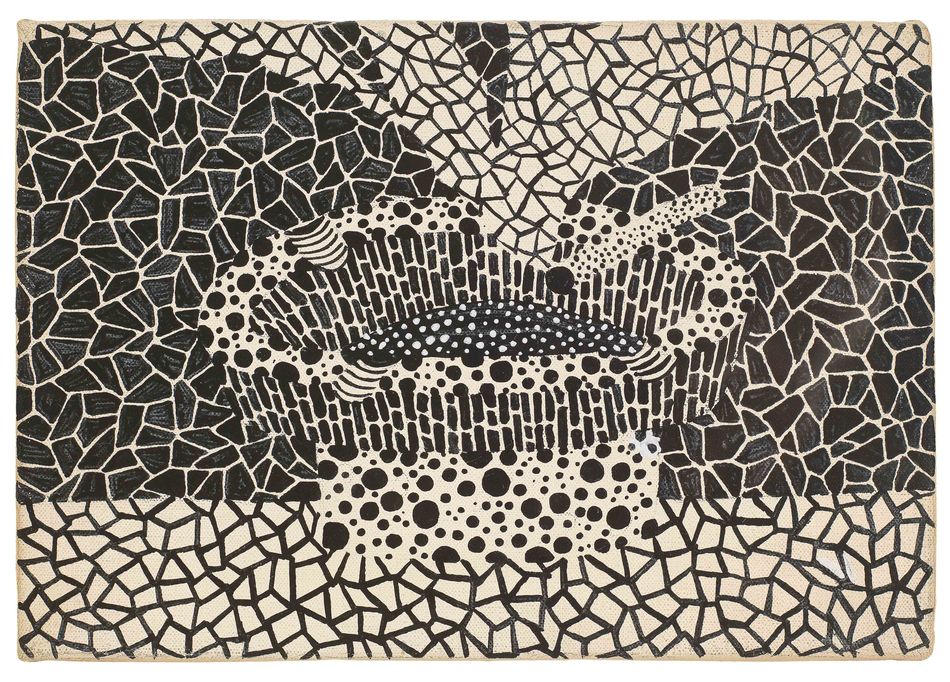 Kusama sees art as an expression of her mental illness. Within her artwork, the most prominent motifs are dots and nets with no lines. Ashtray is a brilliant work in which two of Kusama’s most iconic artistic elements are presented in black, white and grey. In the 1980s, Kusama created a large number of tricolor and primary color works. The subjects of her works during this period were mostly concrete objects, including everything from pumpkins and highheeled shoes to cakes, dresses, Mount Fuji, ashtrays, and so on.

The main body of Ashtray is composed in a classical dot pattern in black, with the bottom and edge of the ashtray defined and outlined by the background of geometric shapes. The granular texture is doubled, and the shapes are irregular sizes. The dots are randomly arranged, creating an undulating visual effect that looks like a threedimensional relief sculpture. The monochrome first leaves the viewer feeling blank, allowing the atmosphere of suggestion and silence to take effect slowly, gradually drawing the viewer into the ''infinity'' vortex. The net-like texture of the background is inversely colored to the pattern on the surface, allowing the work, within a twodimensional expression, to also express three-dimensionality, with far and near, concave and convex. The work evokes changing moods, sometimes tense, sometimes soothing.

The overall style of the painting is somewhat like the fine, tight carvings of a copperplate, or a delicate, flawless piece of lace. The use of strong color contrast in the dots and lines perfectly reflects the artist's pontaneous nature. The technique of expression has transcended the cultural challenge of East vs. West; rather, it combines the characteristics of both sides, and demonstrates the unique style which Kusama gradually developed by herself. In her early creations, Kusama sought to first cover the canvas with a static and complete base, then add as much texture to the surface of the base as possible, arranging micro-patterns together section by section. Because these tiny brushstrokes are time-consuming and require constant movement, the white paint dries and cracks, creating a more multilayered appearance. At the physical level, this technique can create a sense of layers of substance extending into infinity.

As the artist puts it, ''I want to use infinite repetition of rhythm and black and white monochrome tones to present a different ‘lighting’ and seek a new form of painting. This technique can't be interpreted in terms of traditional painting conventions, conventional comparisons, or methodology. In addition, this series of works abandons the fixed focal point and visual center of gravity; this is my original creation”. These individual dots of color are an aggregated quantum; they are holes inverted in black and white. I have a wish: I wish that I can master these dots and measure the infinity of the universe from where I stand in it.