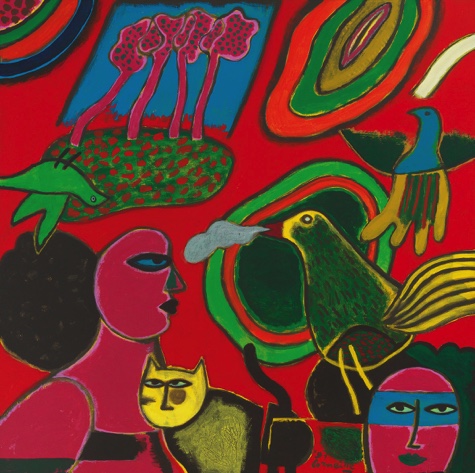 "I dream when I paint them and I hope the spectators will dream a little when they look at them." － Corneille

In the early spring of 1987, the Taipei Fine Arts Museum hosted the grand“CoBrA” exhibition. Major members of the CoBrA artist group include Guillaume Cornelis van Beverloo, who visited Taiwan with other art historians and collectors during the exhibition period. CoBrA's group activists had only last three years, but each member has found a shared spirit through learning from each other's works. Within the group's core value of tolerance, like the example of Corneille visiting Taiwan for exchange, they also believed in artist collaboration for bringing each other inspirational shock and possibility. As a result, the world is still seeing the collaborative effort of the group today.

CoBrA's members were mostly from Scandinavia and they went on to travel and live in different countries. Myths and folklore specific to Scandinavian culture became an endless source of inspiration for the CoBrA artists. Their cultural heritage also allowed them to absorb and contrast different languages and the harmonious concept of human co-existence.
Shown in a documentary, Corneille's studio wall was filled with prehistoric art masks he had collected during his travels. The artist once explained the importance of expanding his imagination for his creativity. He had documented new experiences with his camera and captured the feathers of various cultures.

With the backdrop of his era, Corneille's art not only expressed his unique style but also revealed the influences from other art movements at the time; for example, Edward Munch, Paul Klee, expressionism, and the French- and Belgian-led surrealism. Having once seen the pain brought by the war, Corneille was almost childlike in his artistic expression, full of spiritual freedom and energy. He opposed to Piet Mondrian's“rationality” and any individualistic body or narrow-minded point of view. Realistic documentary or simplistic, revolutionary visual form was no longer his goal. For Corneille, his creativity was driven by human nature and vitality.

Often presenting his works in orange-red hue, Corneille was heavily influenced by his trips to warm places like Africa and Mexico.“Colors” had shaped all the forms in his world. Every color possessed its meaning and it could not be applied to a mismatched subject. His contrasting colors reminded one of fauvist master André Derain's works. Corneille removed the spatial perspective and depth of view that were symbolic of academicism; he only utilized each object's size and relevant position to create a sense of space. In his composition, Corneille was more like a cubist with brighter color palettes and more expressionist.

In his world of paintings, Corneille often used“woman” as his starting point and sometimes it was the entire subject of his story: a naked woman lying sideways with her body kissing the ground, or the silhouette of almond-shaped eyes and a tall nose like the profile of a female depicted on those Egyptian murals.

His French name“Corneille” also meant the carrion crow. Perhaps this explains why his works were always like a pleasant poem. Like a bird in spirit, the artist often wanted to stay close to the women.

Corneille's later works became increasingly romantic and expressionist, like Une Saison lumineuse et chaude, the work for auction. Its bright tangerine background accentuates the black outlines and largely contrasts with the bright green forms. The basic“essential” elements including the women, the birds, and the cat each measured up one another with rich and humorous expressions.

In the artist's imaginary world, vision is like the birds flying in the sky, overlooking the animals and landscape on the ground. And the viewer is allowed to freely interpret the story within. His childlike expression weakens the“reality” and encompasses the various emotional symbolism in his work. In Une Saison lumineuse et chaude, a bird with golden feathers is portrayed to be blowing out faint blue smoke from its bright red beak- does it represent a beautiful song or the flattery that charms many women? The woman on the left, although appearing aloof, cannot hide the smirk on her face. And the cat's nonchalant expression resembles the indifference of an observer.

Corneille created an innocent and bright world that can spark the joy of limitless imagination, like the exotic appeal that he was obsessed with, like the intriguing tale of the Arabian Nights.
Related Info